Flying high above us, aiming for the pure blue welkin, the Money Man presides over my street. The gentleman who tends to him lives across the street, listening to opera and classic rock in his garage all day long. I never noticed before, but now I see him daily. Our routines collide under strange circumstances.

He sees my admiration for his money man, strung up from the tree– sort of fun, sort of eerie. We chat across the black concrete that fills the earth between sidewalks.

A new friend, closer than before but still at a distance.

I always marvel at the capacity for 35mm to capture an image, accurately, but with a distance. A perspective. A simple photo can transform to much more. Digital never seems capable to do the same. 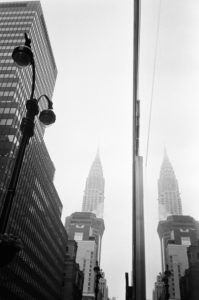 From my roof, the day my second nephew was born.
Clinton Hill, Brooklyn
Spring 2014 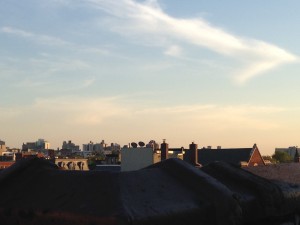 What will be my highest point?
To scrape at the sky.
To tear down the floors of heaven.
To prove angels can fly.
Because without the clouds beneath them.
We hope to make them liars.
We want the Sun.
To rob.
To plunder.
– Milton De La Cruz

At the closing party of the gallery’s theme-of-the-year ‘MEND’, flag artist David Mahfouda unfurled his longer-than-a-flagpole-is-tall flag from the roof of the 5-story high building that houses Proteus Gowanus. The flag had been torn in exuberant waving and joyous dancing on Union Square, the night Obama was elected president. For seven months, Proteus Gowanus had been the “Mending HQ” for volunteers helping David restore the flag, and nurturing its spirit. Together they stitched the stripes back together, and sewed new stars onto the flag’s sky panel.

The flag was created in the year leading up to the election, as a bridge to a new beginning, by reclaiming the stars-and-stripes from millions of lapel pins, born(e) in the aftermath of 9/11, by resizing it millionfold into one flag to be held, moved, and cared for by many.

The night of June 28th, this flag was rolled from the rooftop to be carried by the wind—and torn again by the courtyard’s 19th century brick and mortar—into the hands of those who help mend it, for them to look up that 13-lane highway of red & white to see the big blue with stars, some clear, some still dimmed, and to feel comfort that even in this dire economy, there is a new normal worthy of dancing a jig, even if it’s sponsored by a major credit card.

Who needs a flagpole.

In trying to understand the sky and heavens above New York, I decided to take the most simple approach I could muster: observation. Everyday for two weeks I took reference footage of the sky above New York with my cellphone in the off chance that I would capture something that I haven’t noticed during my day to day operations.

At the end of those two weeks of observation I met a man, Jonathon (with his kids), on the sidewalk outside of a small East Village congregation and he proceeded to welcome me inside and talk with me about his perception of heaven. I recorded our conversation on my cellphone.