I went to South Ferry on a rainy day.

An area rug on cobblestones, reserved for women, framed one of the explorations of beauty offered to the Dumbo Art Festival audience by the South Asian Women’s Creative Collective. Revelatory for the women who accepted the invitation to wear the hijab, and revelatory for the male on-looker.

I was doing a little reading on Welkin in anticipation of the launch event this evening, and found this interesting Wikipedia article about a line of warplanes built in the 1940s with the intention of fighting at high altitudes.

Here is a list of words beginning with D that seemed both mysterious and inspiring enough to use in the Abecedarium: NYC project. We chose diglot and began a  year long production of  shooting New Yorkers who speak two languages in their daily lives. 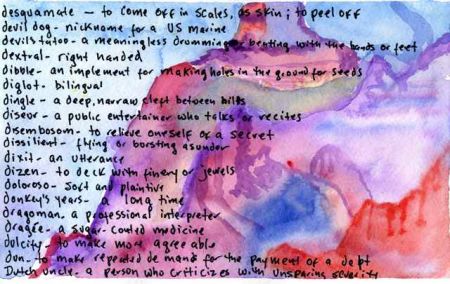 What would you choose?