(n.) An animal that characteristically lives commensally in the nest, burrow, or dwelling place of an animal of another species.

(adj.) Being or living as an inquiline.

In zoology, an inquiline is an animal that lives commensally in the nest, burrow, or dwelling place of an animal of another species. For example, some organisms such as insects may live in the homes of gophers and feed on debris, fungi, roots, etc. The most ubiquitous types of inquiline are those found in association with the nests of social insects, especially ants and termites â€” a single colony may support dozens of different inquiline species. The distinctions between parasites, social parasites, and inquilines are subtle, and many species may fulfill the criteria for more than one of these, for inquilines do exhibit many of the same characteristics of parasites.

re, to flash; see bhel-1 in Indo-European roots.]

Another morning with a diglot, a Latin-rooted word that sounds more like a rare flying animal than a multi-lingual human being. Today I follow Paula Felix Didier, an Argentinean film archivist, as she organizes a collection of 16mm films. I am appreciating the international quality of life here in New York, how easy it is to find a diglots who sometimes move with great effort and sometimes with astounding ease between the different worlds in which they work each and every day.

I love factories, so I feel lucky to spend three hours in the world famous Steinway Piano Factory. It is almost impossible to believe that such an old world institution, producing some of the most sublime musical instruments on earth, is flourishing in the middle of Queens. Here hundreds of craftsmen hammer, bend, glue and tinker with the wood slats and the keys that comprise one Steinway piano. During our three-hour tour, we witness the meticulous step-by-step process. We record the musical cacophony created by the creation of these renowned musical instruments. These sounds will become our second sound addition to the audile archive of New York City noises to remember.

On a cold winter morning, Susan Agliata, my Abecedarium:NYC collaborator, and I visit this surprising burst of sculptural splendor. Modernism meets camp here mid-week, when no one else seems to remember that a symphony of East River wind chimes are beckoning the birds, the boats and the muses. With our microphones in hand, we reach up to the clouds and listen to a lovely, twisting, mobile sculpture as it produces exquisite, rhythmic, bell-like tones. This is our first of many Abecedarium recordings. We will create a sound map of New York City in which our website users will travel from burrough to burrough exploring this metropolis with their ears. 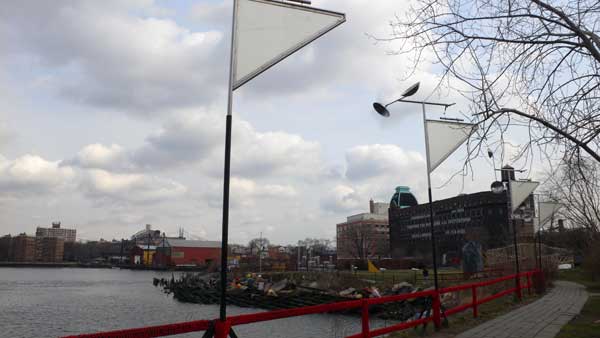