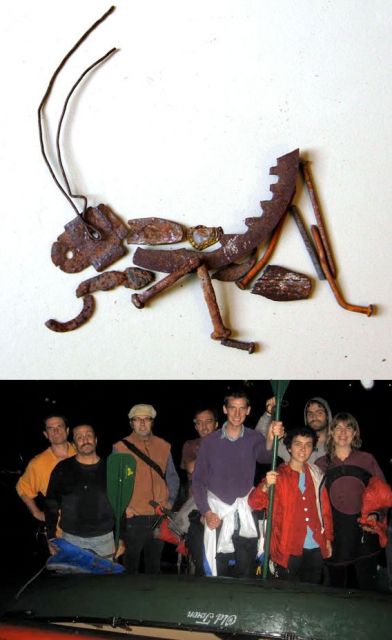 Darkness, amplified by polluted waters and urban hubbub, formed the backdrop in which thirteen Brooklyn artists embarked on counting crickets and katydids. In five canoes, they paddled down Gowanus Canal and into its shallow arms. Armed with MP3 players holding reference recordings of the seven prevalent species found in the five boroughs, they kept their ears peaked. Expectations of an auditory experience were quickly overwhelmed and enriched by the urbanity of the environs. How come crickets and katydids keep calling, if they are outscreamed by cars, trucks, elevated trains, and plant machinery easily filling 99% of the air dome circumscribed by invisible horizons? How come crickets and katydids keep calling in the stench of petrol punctuated by whiffs of sulfur more potent than those Woody Allen alluded to in Deconstructing Harry, if wind in its purest form, silences them?

But yes, in this landscape of silhouetted industrial and traffic structures, against a cloudy night sky of drizzle, and a syncopation of clearly audible sewer spouts, they did hear populations of field crickets, jumping bush crickets and angel-winged katydids, in rhythms breaking the roar of Brooklyn, like the lit windows of the F train periodically sends a floating ribbon of light into the clutter of stationary light specks, to disappear into the dusk of the Smith and Ninth Streets’ tunnels until a next population comes down the line.

The members of the Gowanus Expedition, guided by Tammy Pittman, co-director of Proteus Gowanus, and Bill Duke, captain of the Gowanus Dredgers, called in the GPS position, time, and identity of the species heard, to the AMNH head quarters to be added to the findings of others participating in the Cricket Crawl.

An hour’s worth of canoe travel below street level, looking down at reflections and up out of the dismal olfactory, their ears made them see their hometown differently. Their ears informed their bitten nostrils that even in the grime of our local Styx there are the sounds of nature they were looking for, extended with an illusion of country, by way of the swishes of the soft waves created by their paddles that helped them glide over Lowe’s blue sign, shimmering upside down in the undulating rainbow stains split by the bows of canoes.