The moon is not a stargazer’s friend, and neither are all of the city lights of New York City. Still, with the help of the Amateur Astronomers of New York City, I’ve been able to gaze at the bumpy crevices of our moon like I have never seen it before — from the pitch black expanse of Staten Island’s Great Kills National Park, the darkest spot in the metropolitan area, to the busy center of Brooklyn’s Borough Hall. One cool summer evening in August 2007, I drove to the farthest reaches of Staten Island with my partner, filmmaker Mark Street, and our two daughters. Having lived in New York for almost a decade, I’ve been trained to avoid murky places where a human being a mere six feet away is impossible to see. It was truly scary to drive into a completely unlit network of winding roads full of other cars without their lights on all searching for a few hidden telescopes perched to watch the sky. In Brooklyn, we stood with two breathtakingly knowledgeable astronomers in the subdued light of the borough’s government center. My fellow selenograpahers seemed bewildered by the fact that I was shooting video in the darkness. Surrounded by office buildings and courthouses, I listened to their scientific explanations and personal anecdotes on the narrative of the cosmos. Knowing very little in the realm of astronomy, I felt confident that the reflection of light on the surface of the moon would be just enough to awaken the screen.  (Lynne Sachs) 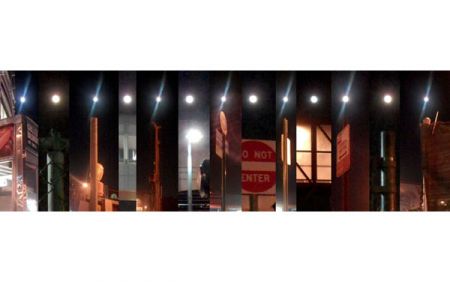 to describe all twenty six

Driving at night in a cab I glance out the window and find a shinny ball bouncing along. It’s almost as if I was riding steady through the city and this light was playing with me, hiding, jumping, shaking -at one point seemingly disappearing. I think the moon is alive. http://youtube.com/watch?v=rmieitB990Y

Selenography: The study of the surface and physical features of the Moon. Historically, the principal concern of selenographists was the mapping and naming of the lunar maria, craters, mountain ranges, and other various features. This task was largely finished when high resolution images of the near and far sides of the Moon were obtained by orbiting spacecraft during the early space era. Nevertheless, some regions of the Moon remain poorly imaged (especially near the poles) and the exact locations of many features are uncertain by several kilometers. Today, selenograhy is considered to be a subdiscipline of selenology, which itself is most often referred to as just “lunar science.” The word selenography is derived from the Greek lunar deity Selene-ography (to write).