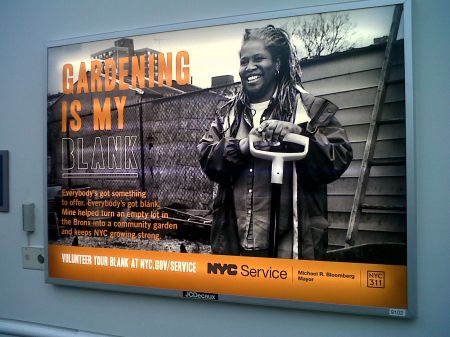 This woman features in my GEORGIC cine poem.  Her reverie on  planting kept me going during the making of the film. I met her two years ago when I was shooting in the community garden at 4th Avenue and Baltic in Brooklyn.  She talked about her garden as if it were her best friend. I tried to find her a few weeks later by asking people in the garden who she was and nobody could identify her.  Recently, my husband Mark saw her picture on this billboard. I still do not know her name, but I do adore her hair, as it reminds me of the roots of a tree.   I am sad to say that the garden itself is gone. They paved over paradise, just like the song.    Lynne

4 thoughts on “An inspiring gardener from a Brooklyn community garden”